Although you won’t find it listed among the giants of the foundation world — Ford, Rockefeller, Carnegie, Gates — the Longview Foundation, in its own way, is just as deserving of attention. 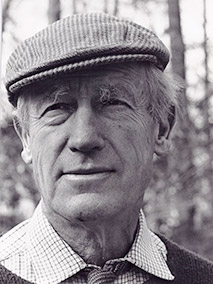 It is the story of a single individual, whose life experience as a boy during World War I and whose service in the military during World War II, led him to commit the rest of his life and a significant amount of his own money to finding ways to create a better world — by cultivating a knowledge of the world and international understanding among American young people.

Although small in scale, the Longview Foundation was ahead of its time in pioneering the development of a new field — global education — which has become ever more essential component for success in an increasingly global society.  It Bill Breese’s dedication to creating the Longview Foundation is a prime example of the American tradition of practical and experimental idealism, of using individual private wealth for the public good.

William Lawrence Breese (1909–2000) who created the Longview Foundation in 1966, was a child when his father was killed in France in World War I. His first memories were of war-ravaged France where his mother drove ambulances for the French forces. Bill Breese was a member of what has come to be known as “The Greatest Generation” and served in the U.S. military in World War II. When the war ended he was a foot soldier in the post-war effort to build international institutions to manage disputes, prevent war, and build international understanding and peace. But peace and understanding proved elusive. The Cold War began. The Korean War was followed by the Soviet Union’s brutal repression of Hungary in 1956. Working with Hungarian refugees in Vienna, Bill Breese saw the price of repression first-hand. The Cuban missile crisis and the Vietnam War followed in the 1960’s, deepening his sense of the real and potential costs of global confrontation.

Here at home, Breese had been dismayed to see the post-war bipartisan commitment to the building of an international community crumble under the assault of McCarthyism and a new wave of isolationism. While there were some efforts to help Americans learn about other peoples and cultures, little was being done to help them understand how the increasingly interconnected world was changing life in their own communities. He firmly believed that the United States would fail on the world stage if Americans did not become better informed about global interdependence.

In 1966 Bill Breese created the Longview Foundation committing much of his life and his inheritance to building international understanding in American schoolchildren. He recruited a small group of educators to serve on the foundation’s board and help him decide how to bring an awareness of the world beyond our borders into our elementary and secondary schools.

Today, the Longview Foundation remains committed to the same broad goals. Our current challenge is to develop international dimensions of education to correspond with the realities of the 21st century. Before he died in 2000, Bill Breese spent the last years of his life strengthening the foundation for the post-Breese future.

I believe strongly that Longview should more than ever be upbeat and dynamic in a rather disordered and confused but increasingly interdependent world. Longview should rededicate itself as a seed money foundation with a balanced program on the pre-collegiate school level with long-range priorities and at this time with special attention to teacher education at the elementary and middle school levels; dissemination; conflict resolution; and human rights.

In 1966, the foundation gave out less than $10,000 in annual grants. In 2014, the foundation made close to $250,000 in grants. In the foundation world, these are not big numbers. The real measure of the foundation’s efforts is in how the money is spent. From the start, Longview has sought to fund selected innovations that have the potential to be duplicated and stimulate larger-scale efforts. Its small grants are designed to get programs started which, if successful, will then be funded by larger foundations, government or the private sector.

The world continues to shrink. The need for Longview's efforts to promote international understanding continues to grow. With pride in efforts to date and recognition of the ongoing need in this field, the foundation looks forward to continuing to support promising practices, thus keeping Bill Breese’s dream of a better world alive.

Primary Source, has developed online courses for teachers to internationalize their classroom and build global competency skills in their students.

Longview partnered with Street Law to apply a global lens to deliberation discussions. Street Law works with  secondary teachers from across content areas to master the use of deliberative discussion in their classrooms in order to build positive relationships across differences.